Streaming media is multimedia that is constantly received by and presented to an end-user while being delivered by a provider. Its verb form, “to stream”, refers to the process of delivering media in this manner; the term refers to the delivery method of the medium rather than the medium itself.

A client media player can begin playing the data (such as a movie) before the entire file has been transmitted. Distinguishing delivery method from the media distributed applies specifically to telecommunications networks, as most other delivery systems are either inherently streaming (e.g., radio, television) or inherently nonstreaming (e.g., books, video cassettes, audio CDs).

For example, in the 1930s, elevator music was among the earliest popularly available streaming media; nowadays Internet television is a common form of streamed media. The term “streaming media” can apply to media other than video and audio such as live closed captioning, ticker tape, and real-time text, which are all considered “streaming text”. The term “streaming” was first used in the early 1990s as a better description for video on demand on IP networks; at the time such video was usually referred to as “store and forward video which was misleading nomenclature.

Live streaming, which refers to content delivered live over the Internet, requires a camera for the media, an encoder to digitize the content, a media publisher, and a content delivery network to distribute and deliver the content.

Internet has lately emerged as one of the most powerful medium for communication all over the world. Increase in its popularity has made live video streaming very famous among people. Video streaming has emerged as a powerful force when it comes to corporate events broadcasting. Thus with this new way of communication, the sharing of knowledge done in basic in house meetings can be shared to people all over the world and even to ones in remote locations through video streaming. Somewhere down the line, this service of corporate broadcasting has made business communication easier and also cost effective. People who are not able to personally attend events also get a chance to witness the events through events broadcasting. Webcasting is becoming increasingly prevalent in the business world today. The knowledge and communication shared in the conventional “in house office meeting” can now be made extended to persons in remote locations. Live My Event is unparalleled in providing business webcasting services and offers this to you in a way that is extremely cost effective.

Educational system in India has witnessed a transformation since the advent of internet as a tool within the grasp of students. Students find themselves better equipped when it comes to researching information and also connecting themselves with students from all over the world, with the help of internet. Educational events broadcasting are a comparatively newer tool that is having profound effect on education today. Today a wider number of benefits can be achieved by educational broadcasting, like lectures could be recorded for students to view it later again. Also those students who are not able to attend the class for some reason or other can see these lectures with the help of events broadcasting. The Internet has had a profound impact on education in India. Students have learned to use the Web to research information and connect with the world at large in ways not previously imagined. Webcasting is one of the newest Internet resources that is beginning to have profound implications for education and is being used by schools in many creative ways.

Family is a very important aspect of a person`s life. In today`s globalized world, members of family are separated by great distances because work commitments and several other factors, may make people settle in far flung areas. The problem lies in the fact that at several occasions like get-together and weddings, the family is not able to assemble at a single place. Business priorities, sickness, distance are some of the factors that cause hindrance in families getting together. In such scenario, personal events broadcasting can be very effective and useful for you. By getting personal events live broadcasting done, your friends and family who are very far away can also witness the events at your place. In our modern world in which so many of us have friends and family separated by increasing distances, it often becomes difficult to get together for even the most important occasions such as family reunions, birthday parties, and most importantly weddings. Sometimes people are traveling on the big day, have other commitments and all too often older people are not well or perhaps confined to a hospital bed.

We provide you with the facility of broadcasting which actually refers to the distribution of content that might be video or audio to a dispersed set of audience through any medium of mass communication but the usual medium used is either internet or electromagnetic radiation. The group on the receiving end here can be either the general public or a particular group of people. Like the people who choose anniversary broadcasting India may only go for a particular set of people including their friends and family to witness the broadcasting. Usually broadcasting is used for varied purposes like private recreation, message exchange, experimentation and much more and we ensure that you get the best service. When we use internet for the distribution of media, the procedure is referred to as webcasting.

A wedding is an occasion that involves a lot of planning and details as the couple involved doesn’t want leave any stone unturned in making this day as special and memorable as they can. This involves detailed planning and execution of all the parts and ceremonies that are involved in the ceremony. One of the new and innovative ways of doing so is by involving our service of live wedding streaming. This serves well especially with those couples who have relatives living abroad and also for those who have decided to have their wedding in some kind of foreign location and not all their relatives can reach there. Our Wedding broadcasting facility becomes really helpful in such cases.

For a multi cultured country like India, religion is a very prime part of life. People are driven by religion even in their daily life as it affects several aspects of their routine. When it comes to webcasting, religion emerges as a prime area where it can find relevance. Doing religious events broadcasting from place of worship can benefit a lot of devotees who due to several reasons are not able to reach these places. With people belonging to a large number of faiths living in India, religious broadcasting India becomes really a very useful, effective in terms of cost and highly beneficial for both people living and religious places situated in remote areas. 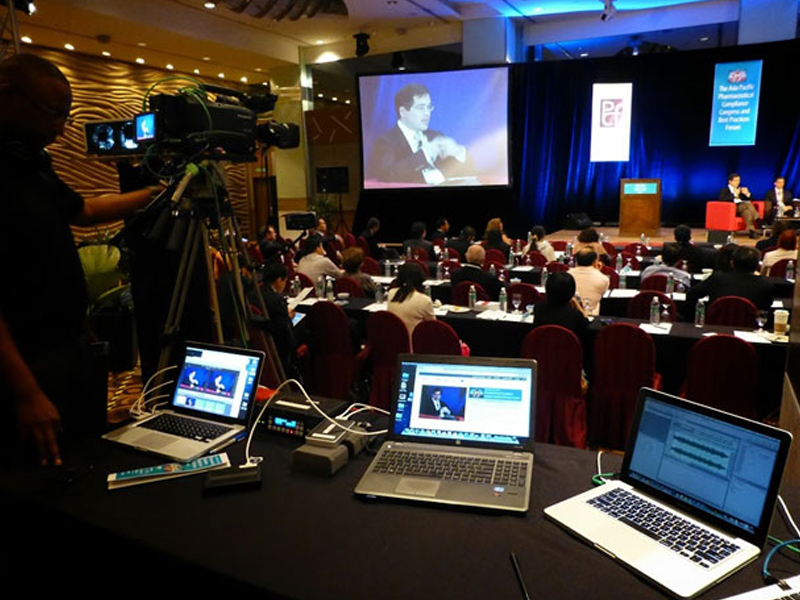